Sometimes people ask me for a bio. If you’re looking for one, here’s an option for you:

Ben Dechrai is a software developer with a wealth of experience ranging from small MVP projects to large scale enterprise deployments. Passionate about working closely with developer and open source communities, he has been coding since the age of 7 and enjoys helping developers find the joy of experimentation.

If you need a photo of me, have at it: 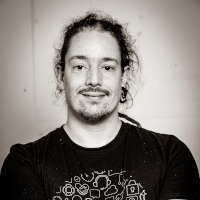 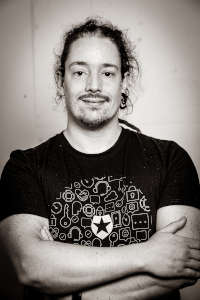 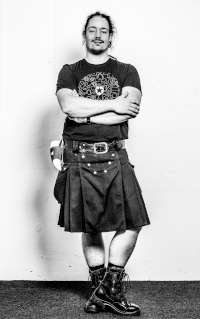 I’ve been programming computers since the age of about 5, coding basic on a Texas Instruments TI-99. My first 8086-based PC was a 286 with a 40Mb MFM hard drive and 2Mb of RAM! That’s right folks. My dad had gone big; most people were still limited to 5Mb disks and were lucky if they have 1Mb of memory. Good times.

Believe it or not, Windows 3.0 would actually run on such a beast, and before long I was hacking the win.ini, system.ini, and progman.ini files to create a multi-user environment, controlled by a series of batch scripts. Every time one of my parents closed Windows (yes, Windows ran under DOS, so there was an exit option), the aforementioned ini files would be reverted to a known good state, so I no longer had to provide desktop support to a generation that didn’t notice they’d deleted the shortcut to Word from the desktop. Again.

Not happy with the prospect that the aforementioned generation might possibly see fit to try and break out of the autoexec.bat boot script, I dabbled in assembly using debug.exe to manifest my most useful creation: a binary executable that would disable CTRL-C and CTRL-BREAK. Finally, I could stop my parents from becoming leet haxxors. Or script kiddies. ¯\_(ツ)_/¯

The final piece of the puzzle fostered mostly fond memories of Turbo Pascal, which I used to create an authenticated menuing system, allowing each family member to have access to the systems they needed.

Historians believe this period of my life was the inflection point that created the privacy loving security monster in me.

Having commenced a software engineering course at university in 1995, I noticed a distinct lack of web development courses available. Sensing a future in this new technology (come on – the first web browser was 6 years old already!), I took matters in to my own hands and started a web development and hosting company, Reality42, with my high-school friend. Kudos to him; it’s still running to this day. I stepped down many moons ago.

Back then, the tech stacks available were limited and rudimentary, and I was getting quite good at ASP VBScript. ASP.NET wasn’t event a sparkle in Microsoft’s eye yet…

After graduating, I intended to take a 12-month gap-year and see Europe, like most good Brits. For interest’s sake I contacted some recruiters via the uk.comp.jobs.offered Usenet newsgroup. Or something like that. Yes, recruiters were on Usenet. And yes, I fell in to a job within 3 weeks of completing my uni course. And yes, I’m still trying to get the travel bug out of my system. And yes, I don’t know if I ever will.